Stainless steels were introduced at the beginning of 20th century and production reaches 40 million tons on 2014 due fast expension of applications.
A Steel should contain at least 10,5 % Chromium in order to be called Stainless Steel.
At this  chromium level,  a chromium enriched  surface oxide,  forms a film and this film keeps the Steel from rusting. This film layer should be protected to keep rustness and  whenever it is destroyed, it can be seld-repaired but air contact should not be prevented 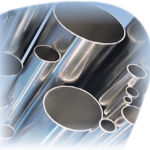